Ideal for RV, marine, and mobile applications and suitable for downtown or wooded (foliage) areas with no LoS with towers

The antenna is also available in N Type Male connectors. We recommend sealing the antenna connectors with dielectric grease and self-bonding silicon tape, when installing any outdoor antenna and cabling. 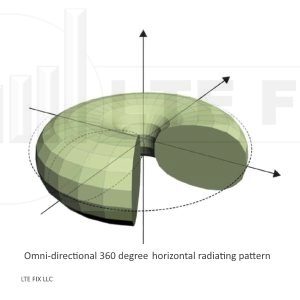 The WiFix AO 1LW727V8  has a horizontal radiating pattern on a 360 degree radius which eliminates the need of aiming the antenna at the cellular tower.

Its Omni-directional design makes it ideal for RV, marine, and other mobile applications.  It is equally suitable for downtown urban settings and other static installations that lack clear Line of Sight (LoS) with the cellular tower–possible due to buildings, foliage and hills.

The AO 1LW727V8 is engineered with a strong fiberglass casing to provide ultimate sustainability against extreme weather conditions such as high temperature, strong winds and rain.

The N Type Male connector is preferred when connecting the antenna directly to an external router Enclosure.  For enclosure applications, there are a couple of options when using a N Type Female bulkhead pigtail connector that extends through the router enclosure: